While researching for an upcoming article for Active Angling NZ I stumbled upon a website called “Rod Building Forum” and a fascinating interview with Tom Morgan on fly rod design.

It is well worth reading:-

Tom Morgan is best known as the owner and principal rod designer for R.L. Winston from 1973 to 1991. He designed bamboo, fibreglass and graphite fly rods while at Winston and is one of the few rod designers to work with, and understand the nuances of, all three mediums. He is a legend in the industry and has been described by Forbes magazine as “America’s Greatest Rod Maker”.

Much of what Tom had to say is still relevant today so I have summarised the key points from the interview.

Tom’s comment about the continual quest for stiffer, fast rods is particularly prescient. I flicked through a tackle catalogue that arrived yesterday and most of the offerings from the fly rod brands on display were either claiming increased speed or distance, particularly into the wind. There were very few slower, parabolic rods on offer. The “need for speed” is still obviously driving fly rod manufacture today.

The general trend is actually for faster “tip flex” rods. Tip flex rods bend more in the first 25% of the rods length from the tip than it does down the rest of the rod. A tip flex rod produces loops that are tighter and more efficient than wider loops and thus are better when casting into the wind or when making longer casts. However, a tip flex action is the least forgiving of all of the actions and if a caster’s timing is off a tip flex rod can be difficult to handle. The common way to make fast action rods appears to be to stiffen various parts of the rod blank and this is done either by increasing the wall thickness or changing the fibre orientation.

As Tom Howard mentions “Graphite blank making technology is now very sophisticated which means that is possible to design very small diameter tips. It is these tips which have the suppleness needed to form loops correctly while casting”. The nett result of fast rod design is that the blanks are becoming less progressive and less parabolic. They are primarily distance tools which are not designed for delicate presentation at short distance where feel is critical to presenting the fly delicately.

Mid flex rods flex from the tip to the middle of the rod and they tend to throw slightly more open loops. Timing is not so critical with a mid flex rod so fishermen with a more relaxed style prefer them. Open loops are an advantage when casting multiple fly rigs with a strike indicator as there is less chance of tangling. They are also better for lifting sinking lines from the water as more of the rod is used to lift the line. Medium-fast is another term used to describe mid flex rods.

Full flex rods as their name implies bend from the tip to the butt. These rods are preferred for small stream fishing where delicate delivery is important. The full flex action acts as a shock absorber to cushion the tippet from the lunges of the fish.

This also got me thinking about modern fly rod tapers and why rod breakages appear to be becoming more common nowadays. Rod designers seem to be reducing wall thickness and diameter to lighten blanks and at the same time introducing nanotechnology into resins to improve strength and stiffness. The nett result is rods that have fairly narrow tapers from butt to tip. Lighter and narrower means less strength as the laws of physics clearly confirm that a larger diameter tube is stronger than a narrower one. Thinner walls are more prone to impact breakage so extra care has to be taken when using them with heavily weighted nymphs. It is also important not to point load them.

To see if there was any common pattern to fly rod tapers I decided to measure all of the fly rods in my arsenal and calculate the taper angle, a, as per the diagram below.

What I found was very interesting. While the overall taper angle of most of the major brands of rod were within 5-8% of each other the Kilwell Xantu rod had a taper which was up to 16% larger than the other rods. The diameter at the butt of the rod immediately in front of the handle (D) was over 1 millimetre greater than the nearest rival and it was also 0.2 millimetres thicker at the tip (d).

Given that all of the rods were roughly the same weight and the Xantu handle is also several centimetres longer than the other rods, this means that the rod blank must be considerably lighter. How can a rod that has a larger diameter blank actually be lighter?

This is probably down to the innovative use of nanotechnology in the resin and the unique Xantu layer which allows Kilwell to increase the blank diameter (to make it stronger) and yet also reduce the wall thickness. This is elegantly simple and very clever. I’m picking that the Xantu layer runs the length of the rod which means that the wall thickness can be kept fairly constant. The nett result is a more progressive, parabolic medium fast action which works both at short and long distance. The image below shows just how deeply down the blank the Xantu rod flexes in the casting stroke. 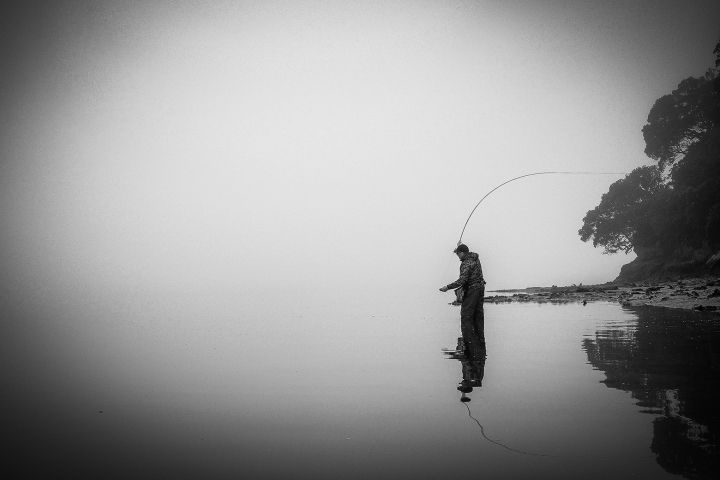 If you study the video which shows how a conventional blank and a Xantu blank bends as load is applied you will see that the conventional blank breaks at the apex of the curve whereas the Xantu breaks much nearer the anchor point where the diameter is greatest. The conventional blank has a fast action and a sensitive tip so it breaks where the tip transitions into the more reinforced section of the blank. The Xantu by comparison has a more progressive taper which lowers the break point further down the blank. (see video below)

The final point relates to ferrules. Spigot ferrules have almost disappeared from modern fly rods. This is a shame as, although they typically can have a flat spot, they do seem to give a more seamless transition between sections and help smooth out the delivery of power along the blank. Spigots are expensive though and this ultimately counts against their use.

In conclusion, rod blank technology is continuously evolving as manufacturers strive to deliver faster rods that find universal appeal. I’m not convinced that there is a need for this extra speed, given that most anglers are casting to fish that are less than 25 metres away.

I’ll leave the final word to Tom Morgan. “Many of today’s anglers started using stiff, fast rods not even realising there are different designs that may be better suited for their trout angling situations. In my opinion, many anglers of today’s generation have never learned the joys of fishing with truly great rods that bend and flex as they should and thereby communicating back to the angler how the rod, line, leader and fly are performing”. Well put Tom. I couldn’t agree more.

10 thoughts on “FAST ACTION FLY RODS – ARE THEY REALLY BETTER?”