Around the world there are several species of grey mullet.  In the UK there are three namely the thicklip (Crenimugil labrosus), the thinlip (Liza ramada) and the golden (Liza aurata). To the untrained eye they may appear to be identical.  The streamlined, silver-grey striped flanks, toothless rubbery lips, powerful muscular bodies and broad sweeping tailfins are universal badges of the mullet clan throughout the oceans of the world.  None of the species grow to a huge size with the thicklip reaching up to three or four kilograms.  The widespread flathead mullet (Mugil cephalus) (known as grey mullet in New Zealand) is one of the largest and may attain about 8 kilograms in weight. Many others are a good deal smaller but without exception they can fight tenaciously on suitable tackle.  As sport fish they are almost unsurpassed.  Only the fabled bonefish is likely to drag line from your reel harder and faster.

The thick-lipped grey mullet is essentially a surface swimming fish that spends a large proportion of its time in shallow inshore waters. It has a definite preference for certain areas of the shore where schools tend to congregate. These regions differ from time to time, particularly in relation to weather conditions, but almost always the greatest concentrations of fish are found in those spots where large amounts of debris accumulated at the high water mark.

Places where weed accumulates in periods of rough weather are where seaweed flies collect to breed and it just so happens that mullet feed on seaweed fly maggots whenever they are washed into the sea by spring tides. Some of these sites where weed gathers are easily identified in a single walk along the shore at any time of day, although the weather and particularly the wind strength and direction are likely to favour specific places at different times. In other words, one place may be better than another, according to the conditions.

The second vital consideration is the state of the tide. Under calm sea conditions, the seaweed fly larvae are only available to the fish at the top of the biggest spring tides. Rough weather in which waves reach further up the beach can easily extend the period worth fishing to seven or eight days in each series of tides. Against this, rough conditions can make it tricky, to say the least, to fish with a fly.

Mullet are invariably easy to see because they often lay at the water surface, or a few inches below it. Ripples, boils, swirls, backs, fins or noses almost invariably gave away their presence. At certain times of the year the grey mullet will jump clear of the water and betray its presence. Once you become accustomed to what to look for it is easy to become attuned to distinguishing the swirl of a mullet from the disturbance caused by the swell passing over a submerged rock. The glint of a silver grey flank beneath the breaking waves will often reveal a shoal feeding on sea-bed algae, or a pyramid of snout adorned with plump, pink-flushed lips could be picked out amongst the little triangular wavelets caused by a squall of wind.

The lips of the mullet are large and rubbery resembling, as much as anything, those of a chub. Once a hook gets embedded in these lips it can be hard to remove but hooking them can be frustratingly difficult. It is common to foul hook mullet and only end up with a massive squarish scales on the hook point.

Post mortem examinations conducted on grey mullet caught from the open shore inevitably only contain silt. However if they have been feasting on seaweed fly maggots washed into the sea when spring tides submerge wracks of decaying seaweed on the foreshore then these will be found during a post mortem, often hundreds in a single fish.

If the water was dirty with silt, then the thin-walled part of the stomach, similar to the crop of a bird, will contain maggots. The other stomach chamber, rather like a muscular gizzard, would be packed with fine gritty sediment. The two items were always perfectly separated. A little research at this stage revealed that the thick-lipped mullet and many of its relatives are basically adapted to feeding on fine particles.

With regard to their feeding habits mullet generally feed on filaments of algae and on the microscopic plant and animal material which is associated with this algae. The mullet’s herbivorous inclinations are confirmed by the enormously long gut, which is only too obvious to anyone trying to clean these fish in the traditional manner by slitting open the belly. In fact, many other species of fish that feed on algae have fairly short guts, and their digestive processes are assisted by the presence of a very strong acid secreted in the stomach. Mullet, in contrast, have neutral or alkaline stomach secretions and rely on the specialised `gizzard’ or colloid mill which, with the aid of swallowed sediment to act as a grinding paste, smashes up the swallowed cells.

Another interesting fact about the feeding of grey mullets relates to their ability to select, or sort out, fine particles of a narrow size-range, from sediment that they suck into the mouth. This selection is achieved by a sophisticated filtering apparatus in the throat. Young (small) grey mullets feed on the same sort of detritus, algae and small animals, as do their older relatives. Studies on striped mullet, off the coast of Florida, have shown that the fish feed almost entirely in the hours of daylight, with a peak of activity just before midday. Similar information is not available for mullets in other countries but from anecdotal observation they are almost certainly active daytime feeders.

Thick-lipped mullet are fairly slow-growing fish. Their age can best be determined by reading the scales, which have very clear growth lines. Mullet only mature at nine to eleven years of age when they are about 14- to 18-inches in length so many immature mullet must be killed each year by anglers and commercial fishermen alike. A good specimen of about 5-pounds weight would probably be not far short of twenty years of age.

Grey mullets obviously have a successful lifestyle as a great many species are very abundant and they are distributed throughout the world. In Hawaii, young striped mullet stay in the very shallow water of estuaries and intertidal pools, only moving offshore when they reach about 2-inches in length. On the coast of Dorset, shoals of tiny mullet swim in the intertidal rock pools, rippling the surface and leaving V-shaped wakes just like miniatures of those made by the adults on estuarine mudflats. When disturbed, the small mullet disappear as if by magic and may then be found wedged into tiny rock crevices and under stones.

In the UK the most common traditional approach to catching mullet was to float-fish for them with bread. This tactic can be “hit and miss” frequently producing few bites and even less fish. Whilst fishing in this way it is not unusual to see shoals of mullet feeding within five or six feet of the shore. In these cases, the fish are not feeding beneath the surface but actually right in the surface film. When this happens the fish have no interest in bread or any natural detritus but are feeding exclusively on the larvae or pupae of the seaweed flies, which were being washed out of the weed by the incoming tide. The best way of targeting mullet with bread when they are feeding on maggots is to “dap” for them with a small cube of bread threaded onto a size 12 hook and drag the cube of crust into the open mouth of a surface feeding mullet.

Another technique which works well for maggot feeding mullet is to target them with a floating fly which resembles a cluster of maggots.  For this to work the fly must float in the surface film and the protuberances which resemble the maggots must move in a lifelike manner as mullet only seem to take wriggling maggots. One common approach is to cast accurately in front of a feeding mullet (you should see about half-an-inch of snout projecting above the surface film as it moves along mopping maggots floating on the water) and twitch the fly gently as the mullet nears.

Another tactic is to cast the fly beyond a group of feeding mullet. After a couple of seconds the rod is raised very slowly and the weight of the bow in the fly line allowed to draw the fly slowly through the shoal. If the fish are feeding well, and have not been scared by the cast, a take may come at any instant and can be detected by a change in the movement of the line which, as the rod is raised, slides smoothly towards the angler. The line may slow down or stop or the bow may straighten perceptibly. Sometimes there will be a knock or a pull on the rod tip, but this usually indicates that a fish has brushed the line with its dorsal fin or bumped into the cast with its open mouth. Many of the abortive strikes, at what seem good bites, are due to these causes. Striking at fish which have bumped into the cast in their feeding frenzy will sometimes result in them being hooked on the outside of the lips or nostril.

For more information on the design and use of the maggot fly click on the following link:- 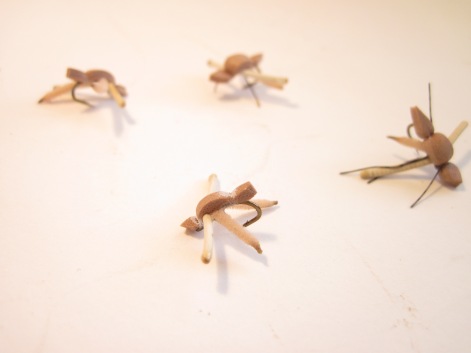 It is also common for UK anglers to thread a small slivers of polystyrene onto the hook shank to make the hook float and then bait the hook bend with a bunch of ordinary, commercially produced maggots. The foam can in fact be a bit of a nuisance as it is easily flicked off the hook during casting or, on occasions, it slid over the eye of the hook and up the cast. Replacing this with a ring cut from the polystyrene tubing used to make Booby fly eyes gets around this problem.

To obtain the best results it is necessary not only to bait the fly with maggots, but also to replace the maggots every half-dozen casts or after every missed bite. Similarly, mullet are easily frightened the presence of an angler on the shore – melting away like magic should the angler disturb them in any way by a sudden movement, or even by a shadow falling on the water.

To obtain the best results it is necessary not only to bait the fly with maggots, but also to replace the maggots every half-dozen casts or after every missed bite. Similarly, mullet are easily frightened the presence of an angler on the shore – melting away like magic should the angler disturb them in any way by a sudden movement, or even by his shadow falling on the water.

Mullet will occasionally take dry flies, such as a Royal Coachman, dead drifted on the surface. Try this if you see a shoal feeding on the surface in the shallows. If you can see that they are feeding on the bottom then a different approach is needed. They will occasionally take a small drab Olive nymph or San Juan worm, especially if it is cast well in front of the shoal and allowed to sink to the bottom. A small twitch as the shoal approaches to alert them to the fly is often all that is needed to prompt a take. Be warned though mullet are very selective and can be extremely hard to tempt.

If this article has piqued your interest and you want to learn more then it would be worthwhile getting a copy of Mike Ladle’s latest book “Fishing for Ghosts”.