As you know, I predominantly stalk (or hunt) kahawai, snapper and trevally on the flats and 90% of the time I only use five fly patterns. These flies are both 5 – 7.5 cm in length and all are fished sub-surface. This is deliberate.

A couple of years ago I discovered an article in the journal Marine and Freshwater Research, 2011, 62, 1327 – 1341 entitled “Predicting patterns of richness, occurrence and abundance of small fish in New Zealand estuaries”. This article was written by M.P. Francis, M.A. Morrison et al. It is a fascinating read for those interested in fishing in estuaries.

What they essentially found was that roughly 55% of the fish species collected were smaller than 7.5 centimetres (i.e. smelt, anchovy, goby and triplefin) and that yellow eyed mullet comprised 35% of the remaining species collected.

Stated another way, 90% of the small fish present are either less than 7.5 centimetres or yellow eyed mullet. When I read this I set about creating several “suggestive” patterns which would accurately mimic these fish species and also any crustaceans which may be present. 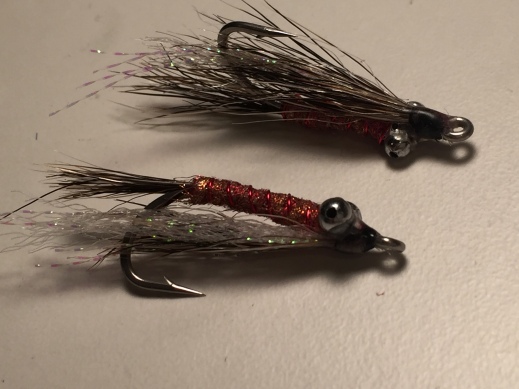 The first is called a Krill Clouser and it is the top fly in the image above. It bears no real resemblance to a Krill and the name is just a descriptor that I use to remind me of the colour. I tell you this now so that you can counter the letters of complaint that will inevitably flood in from the fly tying “glitterati” over the incorrect naming.

I tie it in two body colours and both are ribbed with red wire. The first is Ice Dub UV shrimp pink and the second is a 50:50 mixture of Brown and Copper Quick Descent dubbing. Both materials are from Hareline Dubbin. The former sinks more slowly than the latter and I use it when the ebb tide starts to slacken. Kahawai take both patterns readily but trevally prefer the shrimp pink variant. Below is a photograph showing a Clouser caught kahawai. The brown and copper dubbed fly is also a passing imitation of a shrimp. What the fish actually mistake the fly for will probably always remain a mystery but it is deadly and has accounted for scores of kahawai and trevally, even a few stargazers! I fish it very slowly with a twitch – pause – twitch retrieve.

Click on the links below to view videos of how to tie the Krill Clouser which are on the Active Angling NZ YouTube video site. There are two versions. This version is for the urban professional with ADHD who only has one minute to spare. 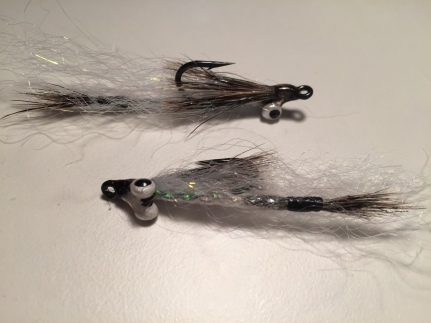 The second fly is another imitative patter I’ve called a Brush Ranger. It is essentially another Clouser variant with a twist as you can see in the images above. The twist is the free standing body which also forms the tail. I use holographic woven material for the body (E-Z body or Expando tube) and tie in a pinch of badger hair from a shaving brush as a tail. The holographic tube reflects light and glistens, just like the body of a tiny fish. In profile the fly could be mistaken for a small fish, mantis or snapping shrimp or at a stretch a small crab with pincers extended. It is deadly on kahawai and trevally when fished on the bottom with a “do nothing” retrieve. I mend regularly to keep the line tight to the fly and allow it to drift along the bottom at the mercy of the current.

The third fly with a fish profile is a basic Matuku fly tied with either a yellow, red or orange body as in the image below. This is fished on a sinking line in the traditional down stream wet fly manner. I choose the colour based on water clarity, how overcast or bright the day is and the light angle onto the water. Low light angles at dawn and dusk suit darker colours as silhouette is very important in the half light. I’ve penned an entire article on choosing the correct lure colour for the flats and this will appear shortly. Kahawai, snapper and trevally will all take this fly. 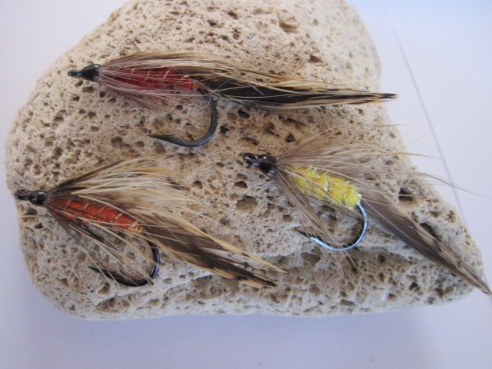 The fourth fly is another fly that is tied Clouser style. It is my take on the Anchovy that are often prevalent around Auckland in the late summer months. This fly can be fished from a boat or over the sand bars and shell banks. It has universal appeal and fools a wide variety of species, both in clear and murky water.

The final fly is in the image below, affectionately known as the holographic smelt. The body is white or pearl Estaz chenille. On top of this I tie in small hanks of blue and purple synthetic Fishair and over this I slide a section of holographic woven material (E-Z body or Expando tube). The coloured Fishair add contrast to the glistening holographic tube and when wet the fly looks just like a small anchovy. It works best in clear water on bright sunny days when it glistens seductively.

It is no surprise that this fly is particularly effective on kahawai schools that are targeting anchovy but is also deadly on big kahawai cruising the surf line looking for injured or disoriented prey.  Medium fast retrieves typically work best.

So there you have it. The “fab five” flies that will end up on the end of my fly line most of the time. I’m convinced that it is more important to limit the number of flies you use and learn to fish these properly rather than have a fly box full of hundreds of patterns that you select from randomly and fish even more so.

Obviously if kingfish are about then these flies may not work so it is wise to switch to patterns that represent what they are feeding on. If they are “ray riding” and feeding on baby flounder then switching to a pattern which looks like a baby flounder makes sense. Similarly if they are targeting larger fish that are schooling in the shallows then fishing the surface with an appropriately sized crease fly or popper would be best. It does make sense to carry a few poppers and crease flies in your arsenal to try and elicit strikes if the fish are feeding on the surface or nothing is taking sub surface flies. Being adaptable and prepared to step out to try something different can occasionally work wonders. Surface takes are heart stopping and epic.

Having said that I do love tying new flies so have both options well covered, even though most of the flies in my box never get  a chance to grab the line and go for a swim.

One thought on “FLY PATTERNS FOR THE FLATS”