When I was young my father, who always seemed to catch something when we went fishing, used to harp on about how I needed to learn how to “think like a fish” in order to become consistently successful. Teenage boys rarely listen to their fathers so this advice, which I struggled to understand without some concrete examples, entered one ear and just as rapidly left the other.

It is a fact that as you grow older you suddenly discover the wisdom in some of the things that you were once told by your parents as an adolescent and this is certainly the case with this piece of advice. I now understand what he was trying to tell me and I’ll attempt to share what was meant with the “learn to think like a fish” comment.

Two things separate the truly skilled anglers from the rest, namely research and observation. The skilled have inevitably done lots of research, either by experimenting on the water or by reading a lot of articles and distilling out the key information, and then modified their techniques to improve their chances of success. It can often be the little details that make the difference (e.g. Hook size, natural drift or presentation, trace or lure weight or depth fished) and these are constantly adjusted during a session to compensate for changing conditions. Secondly, the skilled anglers are almost always very observant and in tune with everything that is going on around them. It is what they see and feel which makes them adjust their behaviour or tackle to constantly make the most of a dynamic environment. This is essentially an angling “sixth sense”.

To illustrate this I recently I read an excellent newsletter from Rod & Reel Auckland on indicator nymphing for trout in the winter. The newsletter contained an article which looked specifically at where fish were likely to hold as they moved upstream to spawn. It mentioned that you had to “think like a fish” and had some excellent images showing the prime lies. The most interesting passages were:-

“Firstly, which part of the river should I be fishing? The easiest way to address this is to ‘think like a fish’. In winter we regularly have larger water flows, more current and there can often be silt or ‘colour’ in the water. The main focus of the fish is to head upstream to their spawning grounds, in ultimately, the easiest way possible. So we need to think about the path of least resistance – what would I do if I was a fish? Places that create slower currents, out of the fast water – such as current seams, bottom drop-off’s and eddies in front and behind rocks  are all areas that the trout will move into and hold up in to recover and rest. These spots are highlighted in the image below. By targeting these areas, you will find your success rate should go up. Also, when the river is flooding and ‘coloured’ up the fish will often move to the shallower edges, or small side streams that are coming in. They do this as the silt clogs their gills and makes it difficult to breathe. (Silt drops out faster in slow moving shallow water due to Stoke’s Law) It just so happens that this water is also easier to rest in from the larger flows of the main current. So try fishing the edges and some of the smaller side streams when the river is flooding, you might surprise yourself at what you hook into!

Try targeting different water. Invariably as indicator nymph fishermen we generally target the heads and middle sections of pools and runs but neglect the tail sections. This can often be because we aren’t prepared to shorten our leader length, reduce our fly weight or are just unsure just where to fish in the tail areas. All of the trout that are moving up-river have come through the fast rapid sections and what they want to do when thy get through them is rest. By being able to shorten your leaders and focus on the ‘pockets’ of water in behind and in front of boulders or where there is a depression in the river bed you may just find that you open up a whole new fishery.” 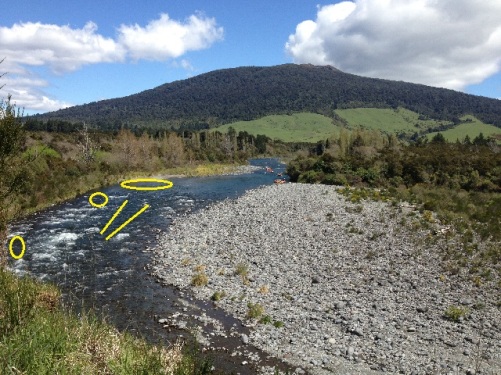 Much of what is said above also holds true for the rest of the year. Trout need to hold in areas where the energy gained from the food captured is greater than th energy expended in catching it. This is why they stay close to the bottom and find pockets of water where it is hydrodynamically efficient to hold position with minimum effort. The biggest trout are found in rivers with the highest water clarity. This is because the better the clarity the more time they have to move to intercept prey. If trout can alter their fin angles to lift and drop gradually to intercept prey then they use less energy and the nett gain received from the food consumed is greater.

Another thing that fish seem to be drawn to is foam lines. Foam is formed when the surface tension of the water has been reduced by the presence of natural surfactants, such as dissolved organic compounds produced by decaying plants and animals, and there is a sourced of aeration. Foam lines are aggregations of foam created by current movement. They are often found when water is strongly mixed with air where rocky substrates have fast currents of water passing over them. It is not uncommon for foam lines to accumulate near the shore due to waves breaking against rocky substrates and outcrops. I’ve had a lot of success targeting foam lines, especially on tough days, and there has to be a sound reason for this. Insects become trapped in this foam and trout home in on this food concentration as it represents easy pickings.

As with foam lines, if the wind is blowing offshore and there are loads of beetles, willow grubs, cicada or other fly life holding in bankside vegetation then it is inevitable that a significant number of insects will be blown into the water.  Trout know this and will take up station directly below the vegetation to take full advantage of the wind blown bounty. It is wise to check out the foliage when you first get to the river to see what is present.

Trout feed on the surface when the concentrations of insects are greatest and this generally occurs at dusk or in the early hours of darkness. The reasons why insect concentrations are greater at these times of the day is due to the phenomenon of behavioural and nocturnal drift. Obviously if there is an increased abundance of fly life after dark then it makes sense for the trout to adapt their behaviour to take advantage of the bounty on offer and this is exactly what they do. This is covered in detail in:- https://activeanglingnz.com/2015/11/10/why-is-fly-fishing-in-freshwater-better-at-night/

Trout, especially brown trout, are opportunistic feeders and will take advantage of any food source which appears in the water. Mice are a key target for larger fish, especially when they are abundant during beech mast years and try to swim across rivers or lakes after dark. It is often a good strategy to fish a mouse fly after dark for this reason. If you want to view a video clip showing trout feeding on mice then check this out:- https://www.youtube.com/watch?v=A4pOOMpFW_8  It is a trailer for the epic On the Fly Productions DVD “Once in  Blue Moon” which is all about mice feeding trout.

One of the things that may also be used by trout to select which flies they are feeding on is the UV fingerprint of the target species. When they lock in on a unique UV fingerprint then it is probable that they become very selective on that species of fly and become difficult to catch with flies that may look identical but do not have the correct UV trigger. Understanding how trout may use UV markers to select prey may enable anglers to tie and select flies which have a greater chance of success. For more information click on:- https://activeanglingnz.com/2016/06/07/consider-reflected-uv-when-tying-flies/

Trout also betray what they are feeding on by how they rise to take a fly. If you are able to read trout rise forms and determine what insects they are feeding on from the rise type then you are well on the way to thinking like a fish. I’ve written at length on the skill of analysing rise forms and it is well worth revisiting this to gain a detailed understanding of what each rise form means. https://activeanglingnz.com/2015/09/30/analysing-trout-rise-forms-a-lost-skill/

There are many other subtle things that anglers skilled in the art of “thinking like a trout” pick up on when they are on the water which enable them to effectively target fish they have spotted.  The only way to learn these subtle skills is to spend time on the water and train yourself to become observant. Look for the unusual rather than the normal. Write down the things you notice so that you can revisit the notes and commit the key learnings to memory. Tight lines!